Last week I returned to Central Foundation, my old grammar school off Old Street in London for the first time in 43 years. It really hadn’t changed that much but the hall where we used to go every morning for assembly to be read the riot act by the prefects was now the venue for the School Supper Society. Produced by entertainment company Jack Arts, it’s an evening of fun and frolics with an excellent three-course meal included in the price. 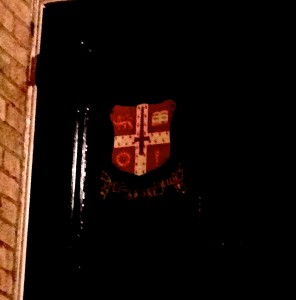 The old school crest. Excuse me for a moment but I’m filling up.

I was last on stage there in 1971 performing in what was judged to be, myself apart, a very funny sixth-form show which we leavers put on. Most of the sketches were lovingly ripped off from Monty Python and At Last the 1948 Show. Sadly, I died a death with what was meant to be a deliberately poor impersonation of Sinatra which was so terrible that the audience thought I was just a lousy singer. Too post modern, perhaps. However, on this occasion, ably directed by Headmistress Miss Chastity Butterworth (Gemma Whelan from Game of Thrones), I did not disgrace myself on this occasion, I believe. 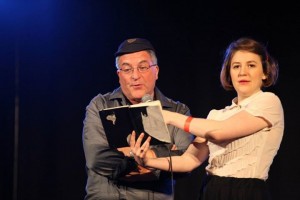 Also on the bill were ‘French’ stand-up Marcel Lucont (geddit?), actually a wryly amusing Englishman by the name of Alexis Dubus who sends up Gallic arrogance a treat – “It is an honour for you to ’ave me ’ere” – and wonderful harpist Anne Denholm. Also on the bill were the 50-strong Chaps Choir (does what it says on the tin) whose repertoire includes a magnificent rendering of a traditional Finnish reindeer calling song and who were followed by resident tap teacher and bundle of naughty energy, Jenny Fawcett. 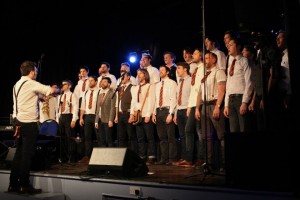 The next School Supper Society will take place on May 10 2014 and I urge you to attend. Acts will include Mr Bingo who specialises in sending customised hate mail on old post cards to anyone of your choice, Jenny Fawcett dancing madly again (I guarantee you won’t be able to stay seated) and the kind but firm Miss Butterworth who will keep a disciplined hand on proceedings. There’s also the possibility of a 28-piece orchestra. And if the organisers need to clear the hall quickly they say I can sing all seven verses of the old school hymn – Spe, labore, fide. What larks!