Road signs are so commonplace that we never think about them yet without a clear system of signage our roads would be chaotic and the risk of accident and injury would be much higher. This year marks the 50th anniversary of their current design on British roads and they were devised by Jock Kinneir and his assistant Margaret Calvert who had already designed the successful motorway signage seen below. They spent a great deal of time researching road signs in Britain and Europe before creating an original and clear form of signage which is still used today, here and in many other countries.

Roads were becoming choked by the late 1950s thanks to the greater availability of cheaper cars and the lack of motorways. The government of the day determined to modernise the country’s road network and follow the German example of country-wide autobahnen, which would also have the positive effect of increasing productivity and boosting the economy generally. Kinneir began working on the motorway signage in 1957 as the need for such routes was more urgent and moved on to primary route signage the following decade.

The European signs were mostly not fit for purpose being illegible and often in capital letters, produced as an after-thought by road engineers not designers, the experts on visual communication. Kinneir, a highly respected graphic designer who had recently developed the signage for Gatwick Airport, took his customary logical approach by posing the question: “What do I want to know, trying to read a sign at speed?” Calvert now says, “style never came into it. You were driving towards the absolute essence. How could we reduce the appearance to make the maximum sense and at minimum cost?”

They decided that a combination of upper and lower case would be more legible at speed than all upper and came up with a new typeface which became known as Transport. The new signage was tested in London and then introduced on the first stretch of motorway in Britain, the Preston by-pass in 1958. The government approved the system and their success won Kinneir and Calvert – by then partners in their eponymous design company – the contract to design signage for all other roads in the UK. The signs conformed to the 1949 Geneva Protocol by using triangular shapes to warn, circles for commands and rectangles to give information. 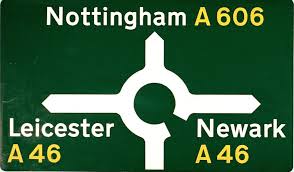 Yes, this is a genuine road sign imparting information. It means: ‘All vehicles prohibited except bicycles being pushed by pedestrians.’

A new reflective material was used on the motorway lettering to enable drivers to see the sign information clearly at night but when used on white background signs on less important roads the letters became indistinct. The problem was solved by using a bolder font and Transport Heavy was developed. Today, three different densities of reflective lettering are used on Britain’s roads, depending on the need and location.

Kinneir and Calvert also designed a system of lettering which could be adapted to different traffic speeds and the level of information which needed to be imparted to the driver. Spacing and layout is an essential part of any road sign and this resulted in a formula based on stroke widths taken from the letter ‘I’ on their own Transport Medium font.

Children crossing. Margaret Calvert based the design of the girl leading the boy on herself.

It was decided to adopt the European style of pictograms on street road signs rather than wording and Calvert drew most of these herself, basing some of them on her own personal experiences. For example, she thought the previous sign for ‘children crossing’ ill-suited to the modern age and, instead of a boy in school cap leading a girl, reversed the sexes and had a small boy holding his big sister’s hand, the girl being modelled on Calvert herself. She felt that the old sign was “quite archaic, almost like an illustration from Enid Blyton…I wanted to make it more inclusive because comprehensives were starting up.” Likewise the sign for cattle was based on a cow called Patience owned by Calvert’s relatives on their Warwickshire farm.

The Sheffield-based design initiative Made North has curated an exhibition at London’s Design Museum of some of the original road signs and modern variants on them created by leading artists and designers of today including Sir Peter Blake, Aubery Powell of Hipgnosis and Jock Kinneir’s son, Ross. Details below but last word here goes to Jock Kinneir himself, speaking in 1965.

“It is sad but true to say that most of us take our surroundings for granted. Direction signs and street names, for instance, are as vital as a drop of oil in an engine, without which the moving parts would seize up; one can picture the effect of the removal of this category of information on drivers in a busy city…It is a need which has bred a sub-division of graphic design with more influence on the appearance of our surroundings than any other.”

Posted in Museums and Galleries.